In 2008 there was a Boulder Conference held on TCWS technologies developed at 14 national laboratories over 40 years, the result of what must have been significant cumulative federal funding. The US Dept of Energy final report for this conference was issued in 2011; the year before however I accidentally stumbled into the same field, wrote up my hydrogen patent in 2012-2013, submitted in March 2013, expired in 2014. It wasn't until 2015 when I discovered the 2011 TCWS Final Report for this Boulder meeting, supported by the TCWS Division of DOE.

Evaluated in the 2011 DOE TCWS report are 336 chemical reaction candidates (in tables at end of report) with a final recommendation on which ones are worthy of further federal funding. The reactions in my patent were not included in the 336 reactions listed though there was one mono-atomic reaction cited (but it wasn't any of the metals in the sea water salts). The objections to the mono-atomic case (for Zinc) raised might not be catastrophic enough to justify the overall negative assessment of TCWS. By contrast, much could be learned pursuing an experimental path searching for unexpected gains based on the mono-atomic metals in the earth-abundant sea water salts particularly due to the low melting point of the eutectic triple mixture of their salts; 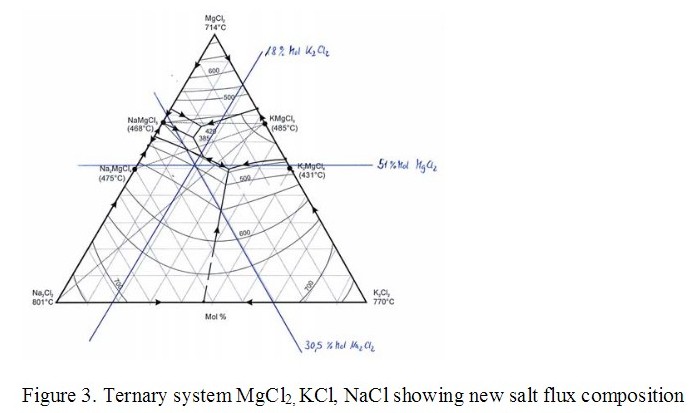 Whether this mixture of their chlorides suggests a similarly lower melting point eutectic mix of their oxides, when the melting points of each oxide alone are among the highest, and whether that lowers the thermal energy demands of metal extraction in MOE, possibly remains unexplored. (The salt flux mixture indicated by hand drawn markings pertains to unrelated research by the source of the image. The arrows on the diagram lines all point to the lowest melting point of 400C.)

TCWS enables conversion of the existing municipal water supply into the much sought after but highly cost prohibitive Hydrogen Fuel Infrastructure. The devising of an economically workable TCWS technology precisely to achieve this ought therefore to be the highest of priorities. Further research in TCWS remains necessary if only to realize that Water is and ought to be the ideal hydrogen carrier medium.