The 1928 Dirac equation describes spin 1/2 particles whose \( Landé \ g \ factor\) values are equal to exactly \( 2 \). This then-prediction of a previously observed (but not at that earlier time understood) effect came on the heels of this value of \( g=2 \) having originally been proposed 5 or so years earlier by Ulenbeck and Goudsmit (generating a now famous anecdote about advice their advisor Wolfgang Pauli offered them at the time) to explain atomic fine structure spectroscopic data. They knew if the \( g \) value was \( 2 \) then the spectroscopic data would be explained, but no one -- not even Pauli -- had any reason in 1923 to think that this \( g \) value actually was 2. What is more, Dirac was motivated to derive his equation for reasons which had nothing to with explaining data. So in the aftermath, the Dirac equation explaining spectroscopic data was an unintended pleasant physics surprize to all.

Accordingly, then, the Muon \( g-2 \) Value is the discrepancy (or anomaly) of the muon's \( g \) value from its theoretically ideal value of \( 2 \). Since an ideal particle of the muon's type (a Dirac particle) has a \( g \) value determined by its magnetic moment then the \( g-2 \) discrepancy is equivalently known as the Anomalous Magnetic Moment of the Muon. The anomaly itself is caused by vacuum fluctuations described by Quantum Electrodynamics (QED) at lowest order being what's called the Vertex correction first calculated by Julian Schwinger. Another explanation of vacuum fluctuations is given by the Heisenberg energy-time uncertainty principle which states that any energy fluctuation violating energy conservation is allowed as long as it is for a short enough time bound by the Planck constant.

As vacuum fluctuations are comprised by all particles in Nature, both those known to science and those yet still unknown, at & beyond the frontier of human knowledge, then measurements sensitive to vacuum fluctuations are probes of the existence (and by experimental conditions of certain properties) of these unknown particles which actually exist in Nature. Therefore new higher accuracy experiments are probes and may discover hence New Physics (NP), at the very least setting limits on the properties of this NP.

The Muon \( g-2 \) value has been measured in a series of, so far five, experiments at CERN, BNL and Fermilab (Final Report publication years need to be checked)

The physics legacy of the muon \( g-2 \) experiments, pioneered by a mentor I was lucky enough to work with in graduate school Francis Farley, and ultimately conducted by hundreds of physicists, engineers and national laboratory staff, at higher and higher accuracies revealing new physics each time, established the Muon as a spin-1/2 particle satisfying the Dirac equation & quantum electrodynamics (CERN I & II), hadron physics (CERN III), electroweak and Higgs physics (BNL IV) in each of their respective eras. All of these experimental determinations collectively are therefore monumental for the progress of particle physics theory enabling the most recent and actively current FNAL V experiment to significantly and severely constrain the introduction of new particles by theory advances, such as Supersymmetry, Dark Matter and now a most interesting new development in 2007 as Unparticle physics.

Below is a 1998 collaboration meeting photo of all of us huddled in front of the Muon \( g-2 \) Storage Ring that was circa 2013 picked up (including its vacuum chamber) in NY, transported by ocean vessels down to and around Florida, on up into the Mississippi all the way to Chicago and ultimately its suburb environs of Geneva, Illinois (coincidentally confused with the other Geneva at CERN) the site of Fermilab where the very same now is operating as FNAL V, to the shock and horror of systematic-error-analysts everywhere. As just such a one, I've circled myself at the lower right. 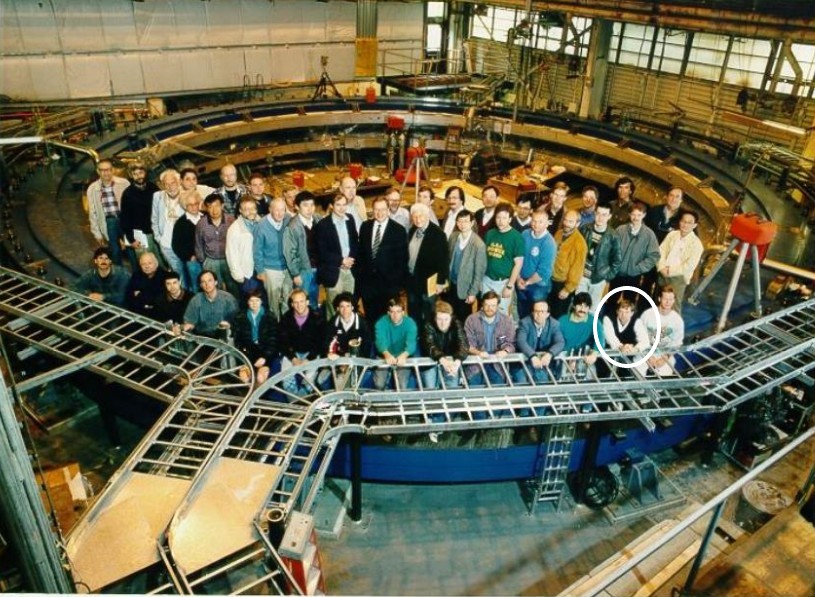 More to come. This site and a slide presentation is currently under development at the encouragement under the helpful guidance of Rick Smith Esq, who happens to be the only person in the world who will even read this page! lol